I have pointed out “nozzle cleaning of nuclear submarines” in USSR gulags – a task killing prisoners quickly (the source is Avraham Shifrin). Somebody has to empty it of fission products regularly and it involves using sucking machines.

On 27 October 2008, it was reported that K-152 Nerpa of the Russian Pacific Fleet had begun her sea trials in the Sea of Japan before handover under a lease agreement to the Indian Navy.[53] On 8 November 2008, while conducting one of these trials, an accidental activation of the halon-based fire-extinguishing system took place in the fore section of the vessel. Within seconds the halon gas had displaced all breathable air from the compartment. As a result, 20 people (17 civilians and 3 seamen)[54][55] were killed by asphyxiation. Dozens of others suffered freon-related injuries and were evacuated to an unknown port in Primorsky Krai.[56] This was the worst accident in the Russian navy since the loss of the submarine K-141 Kursk in 2000. The submarine itself did not sustain any serious damage and there was no release of radiation.[57]“

The nuclear supercriticity in the boost reactor of the front (concealed as “halon gas accident”) is obvious.

Here is the YaK-141 compressing piston. The YaK-141 is pretty much the outline of the F35. Lockheed actually got the blueprints of the YaK 141 at the end of 1991, in an agreement of cooperation with Yakovlev. The nuclear reactor is that 20-cm large pastille inserted in that wider frame, onto which the piston is locked, it is full of tubes for circulation of the air which the reactor heats, for the vacuum pump effect moving the plane. The reactor works certainly with plutonium 239 dissolved in water (so the critical mass is very low, 700 grams and it has a negative void coefficient so it’s easy to handle). I’m saying “heating air” but maybe do they inject some fuel in these tubes around the reactor core so that it turbocharges normal combustion. 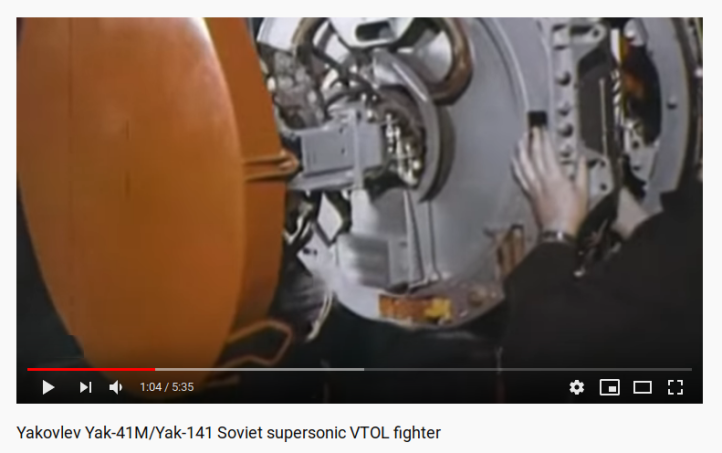 It is obvious that there is a very small reactor with plutonium in the pod.

Let’s look at an accident in a US submarine :

Coming back to the USS Virginia class :

On the F35 it’s obvious : two entries for air, it’s a compressor for a small nuclear reactor in the middle and hot air flows out circularly around the hot core. There’s identical systems in other new-generation fighter planes; they are evident, with big nozzles and no big fuel tanks… Let’s try a list : Mig 25 (the first one, already in 1964, 3400 km/h max speed), and followers, Su 27 and its followers, F14 Tomcat, F15 Eagle, F 16 block 70, F22, F35. All these planes work obviously with water-cooled reactors in which plutonium 239 is dissolved. This is VERY easy and was done already in 1964 for the MiG 25 (fastest airplane in the world).

To show a simple example :

And the MiG 25 was copied immediately… by French and British civil engineers.

Read also the secret nuclear reactor of the Louis St Laurent icebreaker and my article on Sequoyah, Watts Bar, Chernobyl and the other secret sodium-cooled fast breeders around the world (first draft).

A big batch of new diseases (and I have more, cytokine storm syndrome for instance, cystic fibrosis… and I’m a very lazy researcher on this)

A follow-up on the first chapter of From an Einstein Syndrome to the People – the genetics of sexual dymorphism (had you ever heard of X-inactivation?), & innate bisexuality as shield of the mind against social pressures