The latest candidate for a gravitational wave has been reported to be a “merger between a neutron star and a black hole”. It is absurdly wrong. It is a small black hole eruption (see my astrophysics paper in my ebook !). Let’s see the data : 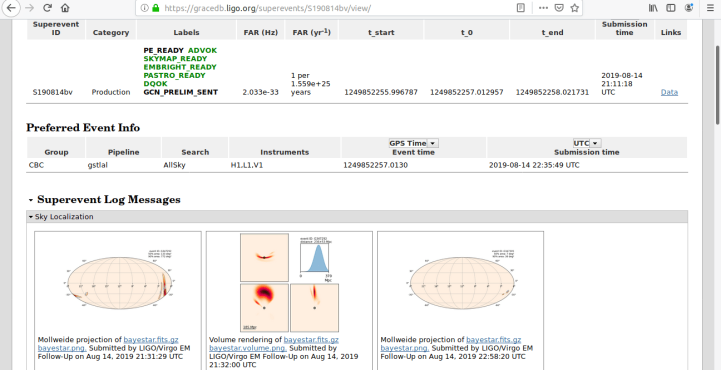 The idea that a neutron star (or any object actually) would bounce around a black hole when crashing into it is simply laughable… in such an event the object is immediately sucked in it and the “size” shows a very small area for the signals.

A small black hole eruption however is the actual explanation. Black holes are the cradle of uranium and all the other very heavy elements formed thanks to compression of smaller atoms. As the black hole spins there is always an extremely limited probability of a nuclear chain reaction inside that triggers the expulsion of the pieces from which stars are made. That’s how all stars are formed and the origin of the “crown of stars”.

Here the chain reaction happens far from the center, close to the outside, hence the pattern. The “banana” anyways indicates the spin of the black hole, even as it erupts.

A comparison with a black hole eruption where the chain reaction inside the BH is much closer to the center of the BH :

The Iranian regime has currently at least 88 tactical nuclear warheads (more than 5 kilotons each) and some strategical missiles of low precision (including micro Teller-Ullam headed drones). The regime demanded international help on vaccines for covid19… after the publication of my article on how to re-use them for nuclear cores !