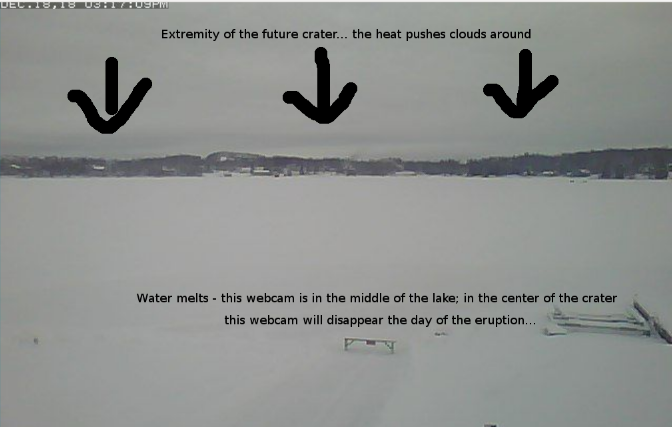 There is a tremendous risk of a sudden phreato-magmatic eruption – similar, in a worst case, to the Krakatoa in 1883 – just in front of Anchorage. An eruption one day is, anyway, inavoidable, the only issue now is – when.

The magmatic activity has been strong and permanent since the first Mag 7 quake at 44 km depth (and NO ONE can ignore this is volcanic, it’s a quake with almost only P waves, a tornillo and the activity since then is the activity of a magmatic chamber, those saying the opposites are liars). If such a powerful quake happens again it can break the ground, and a crack from the depths of the small gulf bringing water into the magma chamber means doom for the area. Water will trigger immediately a powerful explosion which itself brings more water, meaning a more powerful blast, etc until the whole ground is expelled, and this in maybe a few minutes. This means a semi-horizontal blast and a huge wall of water directly into Anchorage… The city is so close it will be flooded in a few seconds, and partly burned down as well. (Buildings made of wood…)

To take a comparison with another volcano forming in flat ground, the Paricutin in 1943 : here in Anchorage the most shallow quakes have happened at depths of 21 kms, the basis of the magma chamber is at 44 km (at the depth of the most powerful quake). The first crack that immediately was filled with lava in the case of the Paricutin was likely of a depthness of 30 km according to this 1990 article by Yokoyama and De la Cruz-Reyna (page 15). So in that “Paricutin scenario”, the fact that (if the crack allows seawater to get into the magma chamber) what immediately comes in the chamber is water means a brutal, one-shot eruption, instead of a long spilling of lava into the fields (the Paricutin eruption lasted from 1943 to 1952). In a worst-case scenario the horizontal blast can travel at up to 1000 kilometers / hour… And I really say this worst case scenario is a strong possibility here.

I recommend the area be left very quickly. Big Lake is an interesting case study to show how fjords are born. The volcanic eruptions dig progressively the fjords. To find the future fjords, follow the lines of lakes. Each lake is an ancient volcano crater. Just see the huge concentration of small lakes around Big Lake and the Cook Inlet, itself an old crater (a part had actually to be dragged, in the entrance, to allow boats to navigate – US military document).