UPDATE : One test with sat pic of the entry of the tunnel

Iran has been making antitank warheads since 1988 at least (first version of the Toofan, second version in 2000), and I show these weapons need nuclear fission to work. See here for confirmation of the ability to dig deep underground with France (the “Superdeep Kola Borehole” is known since long ago – this is an example with French underground nuclear tests in the Kerguelen, in a pattern matching precisely the development of a new nuclear warheads, in an area with no volcanic activity) – my point is that all major countries do nuclear tests underground by digging more than 10 kms so that the CTBTO does not officially confirm it is a nuclear test (“because no human has ever dig so deep underground, do you understand ?”).

Update : another one on 03/21/2019 – exactly where an Iranian scientist said Iran is testing i.e. north of the Ormuz straight. 100% P waves. This is a period of local tensions and India and Pakistan have also tested both in the recent weeks.

My previous version of this article on Iran pointed to an area that happens to have a volcanic history. Hence it is not possible to discriminate (because magma formation creates earthquakes dominated by P waves, like underground nuclear tests), even though it may be tempting for a power willing to take the risk of digging there to better hide their tests. However, other earthquakes in the past in Iran have all the characteristics we seek (not very deep, dominated by P waves, no volcanic activity in the area, i.e. far from any mountain that could be a volcano).

A very good example : in a flat area near Iranshahr where the only rocks around are ophiolitic (no magma formation) : yet P waves only, 15 km depth :

Same area, a bit more to the west :

It is simply impossible to have volcanic activity in that flat area with no magmatic rock nearby. 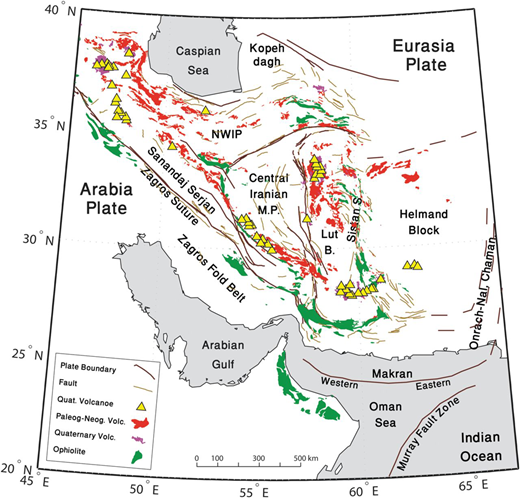 Here is one where you can see the epicenter is in a highly desertic area with nothing like a mountain around. A bit more debatable because there still is some magmatic formations around yet suspicious.

The first case is the 2003 quake of Magnitude 6.6, 10 kms below the ground, this time near Bam, a very flat city. No EMS-CSEM data yet the waveform is obvious, it’s an underground explosion (no S waves, just the ground shaking up and down) and this is far from any mountain where magma could be in formation (in the flat plains, a bit south of Bam, yet far (+ 15 kms) from the mountains that emerge more to the south and where the magma formations are). Also, it is very unusual for this area to have so powerful tremors. It is simply a non-sense to have a volcanic tremor here, and the depth of the quake was limited to 10 kms. The ONLY explanation is an underground nuclear blast. Very powerful, since the magnitude is so high. Megatonic. Likely a big useless bomb, “Iranian tsar bomba” first, to frighten diplomatic services. Miniaturization later. But since 2003 that’s a lot of time to miniaturize a bomb and it’s certainly much more powerful than the 10 kt allegated by Netanyahu on April 30 2018.

And another more than suspicious place, the “NWIP” area in the geological map above, where I find for instance this more-than-clear case :

And this one nearby :

An Iranian nuclear scientist who said he had worked in the Iranian nuclear programme pointed to the north of the Ormuz strait for another bomb (2011 article by Israeli newspaper Arutz Sheva) which is another non-volcanic place where indeed P-waves without S-waves means nothing else than an underground nuclear test.

The Washington Post in this article quotes a CIA memo saying the Iranian nuclear programme “was halted in 2003”. The memo is from 2007. I do not find any test between 2003 and 2007 so this matches.

Also enjoy your time on Earth. Meditation in nature is underrated. It’s where certainly the light can come to you the most wonderfully. I have made my best scientific discoveries while going around, walking and looking at the world. You don’t find the light in man-made buildings, where humans dominate the area and subdue the elements. It’s impossible.

The Iranian regime has currently 91 tactical / strategical nuclear warheads (for a total of 35 MT of nuclear energy if sodium is correctly converted into Na24…) and some strategical missiles (including micro Teller-Ullam headed drones and more recent weapons as well). The regime demanded international help on vaccines for covid19… after the publication of my article on how to re-use them for nuclear cores !

Did you know ? The Overcast operation of the Paperclip programme led to Nazi antitank bombs with human ashes (Birkenau...) captured in Germany recycled in Fat Man.