Pesticides and birth defects in Argentina : high natural radioactivity as an alternate explanation

Sometimes research picks up a phenomenon and attaches them to some new issue whereas the phenomenon was actually a long-term one with no relationship to the issue that is pointed out. Once you suspect there is some external, anthropic factor in cause behind some phenomenon, you sometimes look at statistical data with another eye, collect everything likely to confirm your hypothesis and reject all contradicting elements. Forcefully imposing a claim is everything but science. This is especially easy in countries with no significant tradition of research, where data for comparison is difficult to find (where birth defects ever recorded before the use of pesticides in Argentina ?).

This may be the case with birth defects and other cancers in Argentina. One credible explanation, to me, is not pesticides, but high natural radioactivity. I have demonstrated elsewhere (article on depleteduranium.org) how internal contamination by alpha emitters is the most prominent aggregate factor (except of course higher artificial alpha radioactivity…) for cancers and birth defects, with France and infantile cancers as a first stop. Infantile cancers are a good “thermometer”. This is also discussed in “Depleted uranium, the invisible genocide and the seeds of terrorism”, book now available. I also come to show, identically, the mutagenic effects of low doses (Down Syndrome, autism, schizophrenia…). Research by Timothy Mousseau and Anders Moller also confirms the mutagenic effect of low doses (published in Biological Reviews, 2012), as well as Langlois et al 2015 on radon and birth defects. The article on cancers linked above makes a comparison with areas where lots of pesticides are sold in France : they are the opposite of areas of high prevalence of child cancer. Even though the probabilities are still very low, the amount of cattle (sky high in Argentina) explains very well the occurrences (frequency much lower than areas bombed with depleted uranium).

Argentina is quite an uraniferous country. Following is a map of uranium extraction projects, by Harikrishnan Tulsidas (IAEA researcher), on which I have added some black points for radon-rich areas – list provided by the Autoridad de Regulacion Nuclear argentina, shows that Entre Rios, which is an area where birth defects on cattle were recorded, has a quite elevated natural radioactivity (second highest average in the country). Corrientes also has an above average record, with a high maximum. On a general note I think the whole map of radon results in Argentina has been underestimated : the levels recorded seem extremely low for a country where the uranium potential is significant. So, to sum up, let’s compare black dots of significant radon-rich areas (I have also added San Luis where very high radon levels were encountered in La Carolina, a former gold mine) with the available map of animal birth defects (provided by “March Against Monsanto”…) : 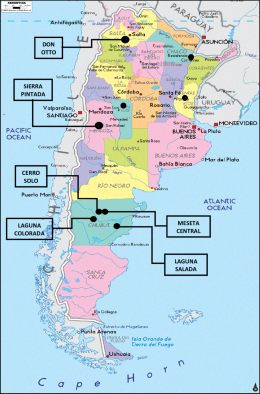 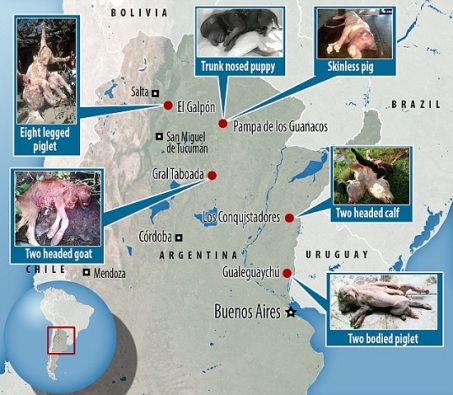 So there clearly is an alternate explanation to the defects. Child cancers, too, were recorded in the country and associated to pesticides. Even though you record a cancer, and find pesticides in the blood of the victim, this is not enough, you would need to compare with healthy subjects, and cross check with uranium, thorium and decay products. These were never studied in all research about pesticides (and, for instance, autism (depleteduranium.org article), which we show, as indicated earlier, to be directly linked with radioactivity levels). Likewise, alpha emitters are nanoparticulates of oxyde which can travel all around the body, through blood, nerves, lymph, and can reach any part of the body. Alpha “shots” can hence damage any organ, any gland, and cause any type of damage.

Radon getting into the blood, uranium, thorium or a decay product as oxyde nanoparticulates in tap water too, are threats for health on the long run, and the key is that because of the long term exposition, even though for one individual results may variate, on an aggregate level, for whole populations, effects are linear with the intake of becquerels of alpha emitters, with no minimum threshold.

Last point : in my book and in depleteduranium.org I show that Agent Orange is not linked to the birth defects in Vietnam (massive depleted uranium weapons use is).

Post-scriptum remark : there may be military training areas of the Argentinian army somewhere – I have been unable to find them. They may be the cause of birth defects because of the use of depleted uranium shells. On an aggregate level the effect of military camps does not seem blatant in European countries.

The Iranian regime has currently at least 73 tactical nuclear warheads (more than 5 kilotons each) and some strategical missiles of low precision (including micro Teller-Ullam headed drones). The regime demanded international help on vaccines for covid19… after the publication of my article on how to re-use them for nuclear cores !